If you are looking for some help or simply have a question please complete the following and we will be in contact: 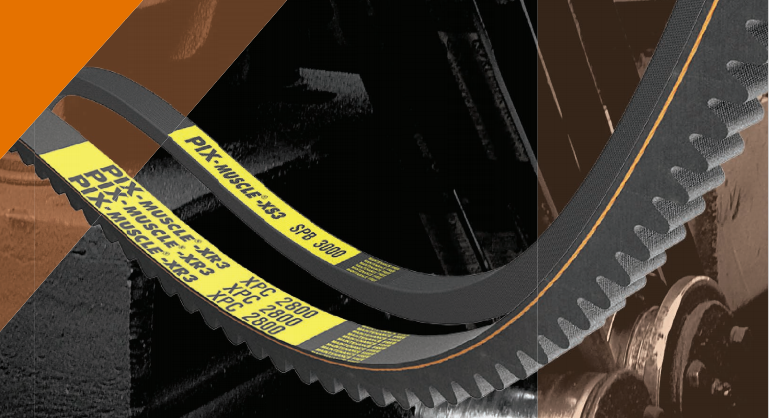 by Gary Brown
in Blog
Comments

V-belts are a low maintenance solution which are suitable for mid to high power belt drives, delivering a high level of efficiency. This makes v-belts amongst the most common components in modern machinery, found in almost every industry, from agriculture to pharmaceuticals.

We have been speaking to our silver foxed, technical guru, Tony Brown about what exactly it is that causes premature v-belt failure in a range of industries, and how we can help you to get the most out of your v-belts.

Visually examine your v-belts to check for any of the below symptoms to combat premature failure and unplanned downtime:

Although side wall wear is inevitable over time, rapid sidewall wear can be a sign of a bigger problem, as most commonly it can be attributed to worn or damaged pulleys. However, there are many other possible influencing factors such as: using belts in extreme heat, excessive oil, grease, moisture and other generally abrasive environments can also cause this type of wear.

Solution: Ensuring pulleys are replaced when changing belts is important to be certain that you are getting the most from your belt systems. If the pulley wall is bright and shiny then it’s time to replace it.

2. WORN COVER ON BACK

Most commonly, back wear is a direct cause of the belt being forced or pried on to the pulley or that there is some misplaced slack within the belt which is causing damage by vibrating against the idler during operation. Although, on some occasions defective or worn backside idlers can contribute to worn backside covers, although this is less common.

Solution: Making sure that your belts have the correct tension on installation is essential. Even belts that are measured correctly and considered ‘fit and forget’ such as Optibelt Red Power 3, need to be re-tensioned within 24-48 hours of installation.

Excessive exposure to oil or grease can be a recipe for disaster for some v-belts as these products can cause belts to soften and become swollen, and thus no longer fitting properly into the pulley groove. This sort of problem could also be similarly attributed to the use of belt dressing.

Solution: If belts are working in extreme conditions, likelihood is that it’s not reaching its full potential. A simple belt guard can prevent foreign bodies including oil & grease from contaminating the drive, while it’s always worth noting that belt dressings are to be avoided. If oil and grease is still a problem, consider using a composite v-belt such as Fenner Power Twist belting as they are generally unaffected by oil, grease, water and common industrial solvents.

Spin burn can be cause by worn or damaged pulleys, and incorrect tensioning, which can wreak havoc on your belts causing damage and ultimately, premature failure. This can also be less commonly caused by using the wrong belt cross-section or type, excessive oil, excessive grease or moisture and insufficient wrap on a small pulley.

Solution: This type of wear means it’s time to check your pulleys and belt tension as under tensioned belts and smooth pulleys mean unnecessary wear. You may well find that you need new pulleys or to re-tension your v-belt.

There’s a lot to be said about the damage that can be caused from forcing a belt onto a pulley or running your v-belts with the incorrect tension, as this is the most common cause for many types of belt damage, including cover splits.

Solution: If you’re sure that there are no foreign objects in the grooves that could be causing the issue, then ensuring regular belt tensioning and that the correct size belts are ordered every time, you can help to avoid this issue.

Cracking in belts can cause serious issues, particularly if they are left untreated as they can affect drive efficiency and eventually cause belt failure. Cracks commonly begin to appear on belts that are being exposed to excessive heat. Although it cannot always be exclusively attributed to this, as pulleys and backside idlers that are too small or misaligned can also cause this cracking.

Solution: If your v-belts are working in extreme temperatures, it may be time to consider an EPDM rubber belt, that is designed to be able to withstand these temperatures without premature or unnecessary failure.

Missing cogs can cause belts to slip and fail, when it is discovered there are teeth missing, the belt should be changed immediately. The most common reasons your belt could be missing a cog are excessive heat, the pulleys are too small or misaligned. It can also be caused by improper or prolonged storage of belts.

Solution: Once again, if your cogged v-belts are working in extreme temperatures, it may be ideal to consider belts designed for these environments. Additionally, establishing that your pulleys are correctly aligned using a laser alignment tool can eliminate the possible cause and improve machine running.

Having cracked bushings means your drive is in dangerous territory, if the damage becomes too severe, your pulleys may not be attached securely to the shaft. Bushings can become cracked due to excessive tension from the drive or using worn or damaged pulleys.

V-belt drives really don’t need a lot of attention to be efficient but getting the basics right can avoid these types of failure and really improve the life span of your belts and pulleys to ensure you get the optimum efficiency from your components.